Our generation is the most successful in the world, with many technological advances. But when it comes to hairstyles, Viking people were undoubtedly the best who gave us a great deal to learn from them. Viking people are known for their robust, rough, and tough look, and their hairstyles reflect this look. From short hair and bald look to top buns and braided ponytails, these people have a vast hairstyling history. Here are the top Viking hairstyles that are also current trends today. You will surely love to learn about them. Just check the list below.

1. Half Bald with Long Side Swept

This hairstyle is less common in today’s fashion, but Nordic warriors highly adopted it. Half of the head is shaved bald, whereas half of the head have long hair. The side hair is combed and put straight thus to give a rugged warrior look. Most people also like to add a medium length beard in this style, which complements the Viking hairstyle and warrior look.

2. Viking Hairstyle with Shaved Back 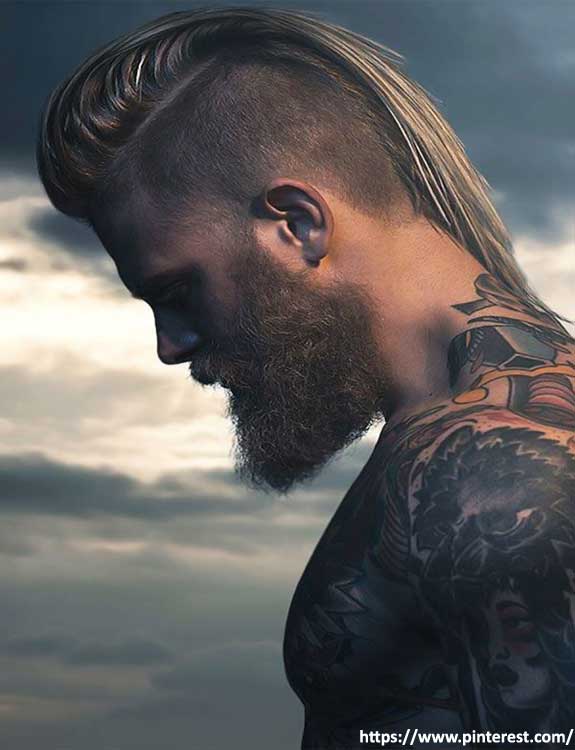 One of the most famous Viking hairstyles is the one having shaved back. In this haircut, the front hair is long with a spiky look; however, the back hair is cut very short to give a bald look. Vikings used this haircut in many different ways. This rugged and masculine look gave the Vikings a robust and warrior-like appearance.

We can all observe that Vikings had a strong preference for ponytails. The ponytails or braids were their important characteristic. So this hairstyle is also related to their ponytails.

To make this Viking hairstyle look, all the side hair are shaved to give a bald look while the center hair is kept as long. Then all that hair is used to make a straight down braid and ponytail. 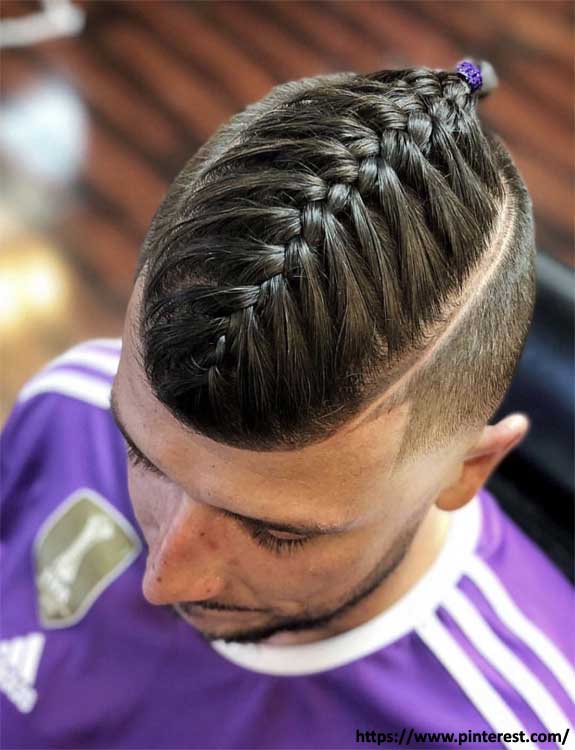 Dutch styles influenced Viking hairstyles to a certain extent. Thus, we can see Dutch braids used in some iconic Viking hairstyles. In this hairstyle, they shaved the side hair and made the sides bald. However, the center hair is somehow long, and they are gathered to make a Dutch braid. Vikings considered this to be a very fashionable hairstyle. 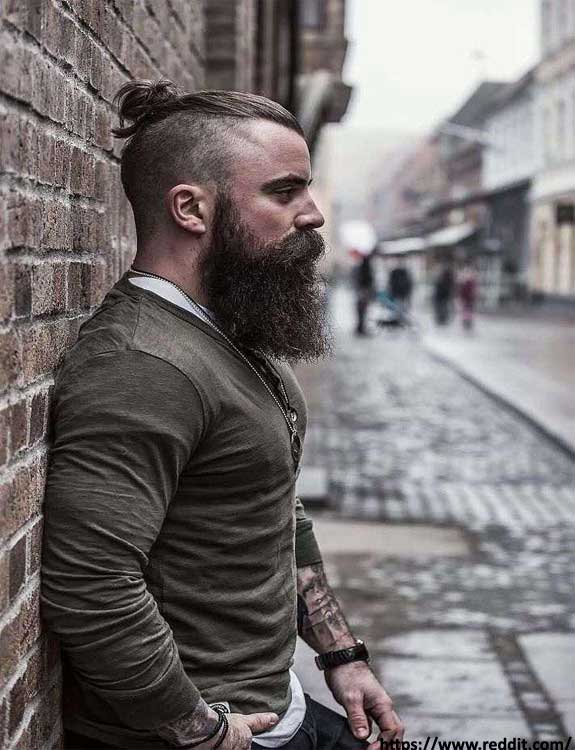 Viking hairstyles and their beards complement each other. By contrasting their beards with hairstyles, they made themselves appear fierce and powerful. Top Knot undercut with the rugged beard is a prevalent Viking hairstyle. For making this hairstyle, you have to gather all your top hair to make a knot on the top of your head. The sides, as usual, left with very short hair. Moreover, you have to keep your beard long and messy. 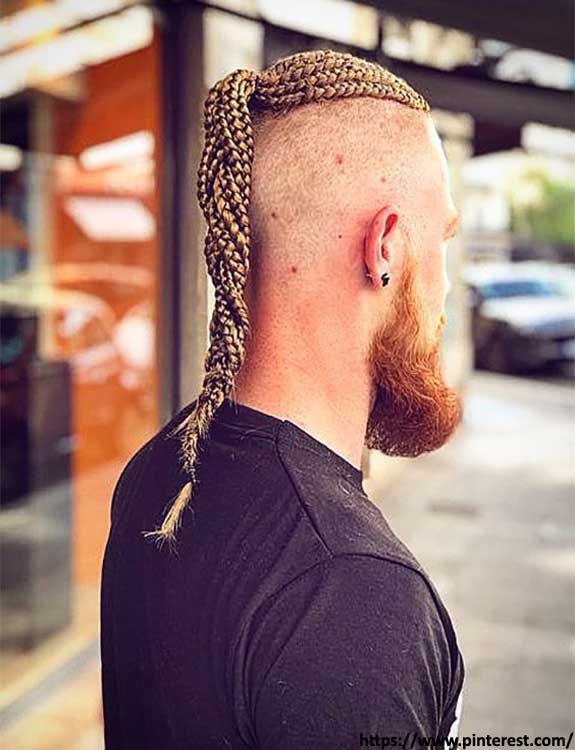 Nowadays, cornrows are just as popular as they used to be. Braided in narrow strips, this hairstyle is worn from the forehead to the back of the head. Straight braids create a geometric pattern that gives a neat and rugged look at the same time.

Hair cuffs, bands, stripes and cowry shells can be used as accessories to highlight a hairstyle. Additionally, cornrows were a preferred hairstyle among Viking warriors back in the day. If you have an undercut and thick hair, then you can go with this hairstyle. 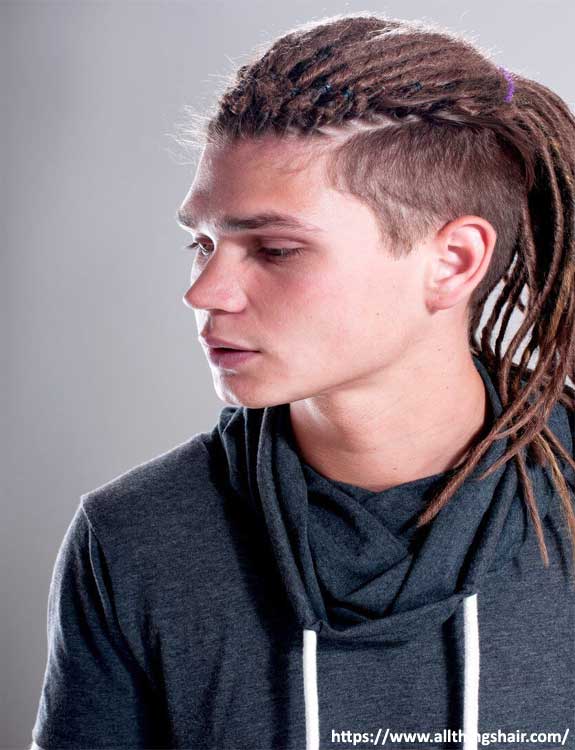 You won’t believe how simple this bun hairstyle with braid is. With the shaved head, a French braid is added to the top long hairs and also a small bun is added to the end of the hair to tie it properly. Braiding can be done in many ways for this hairstyle, and you can choose whichever braid you prefer. 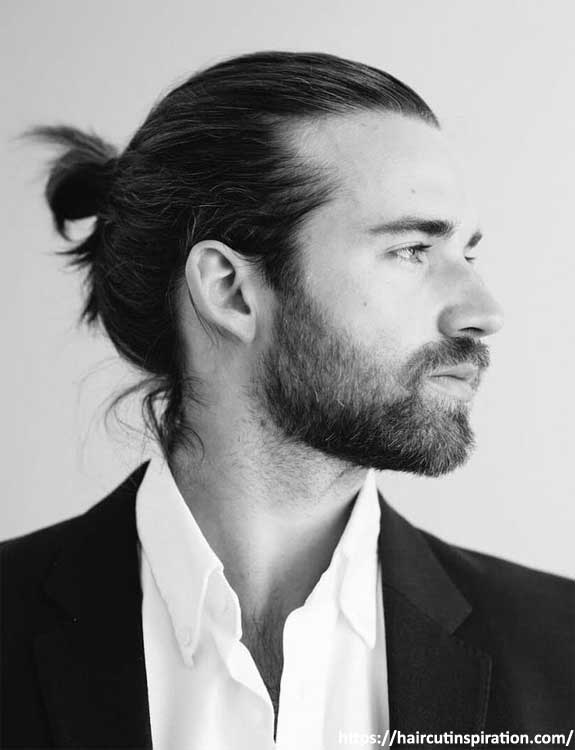 A Viking hairstyle can be created in many different ways for long hair. But one of the most effortless Viking hairstyles for long hair is the messy half-bun. Half of the hair are tied or knotted on the top, while the other half are left untied. Rather than go with a messy bun, you can also create a neat look with a neatly combed bun. 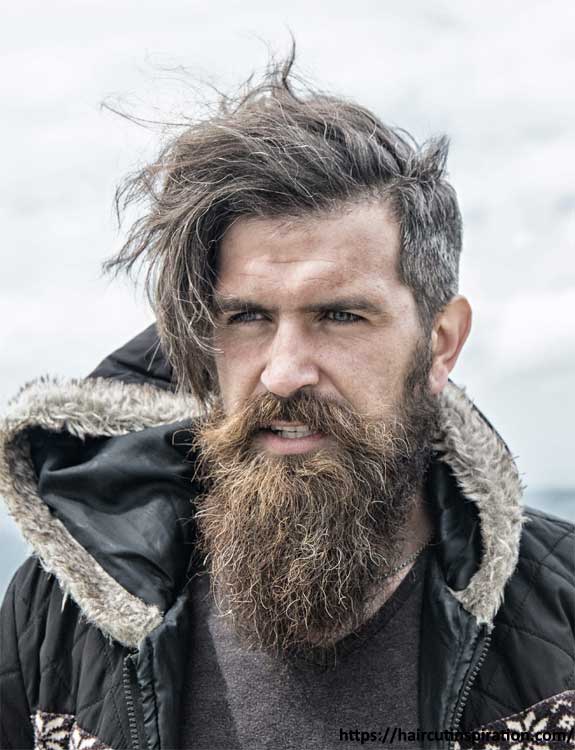 It can be a daunting task to achieve a Viking hairstyle with short hair. Getting a buzz cut with clean undercuts is what you need to do. It might be a good idea to get some tattoos done inside your undercut. Moreover, if you don’t want to have a tattoo, then skip it. 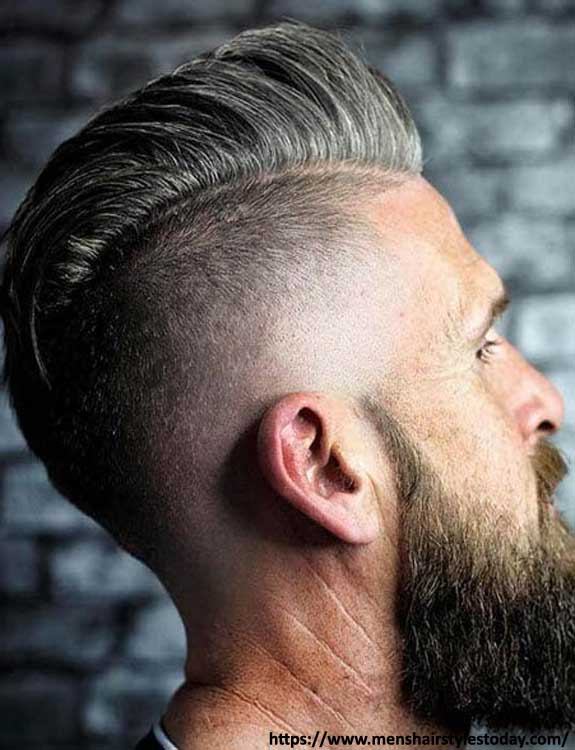 This Viking Mohawk hairstyle is considered as the symbol of power and warrior. As the “Mohawk” term means “man-eaters”. But man-eaters term does not mean the people who eat men. Actually, it is a symbolic word that describes a mighty warrior.

11. Long Braids with Half Top Bun 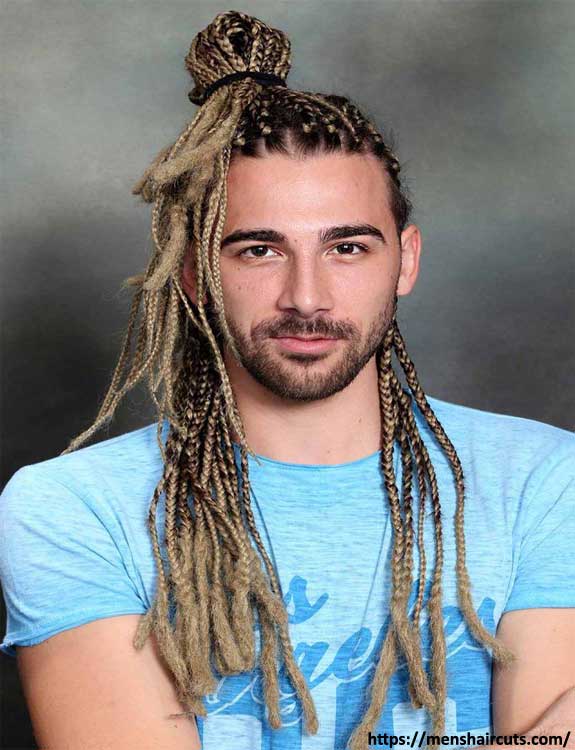 A Viking hairstyle will surprise you with its variety. From short bald look to long hair, Viking hairstyles have every kind of look. This Viking hairstyle, as its name suggests, needs long hair. A bun is made at the top of the head. For the remaining hair, you can go by making small braids. 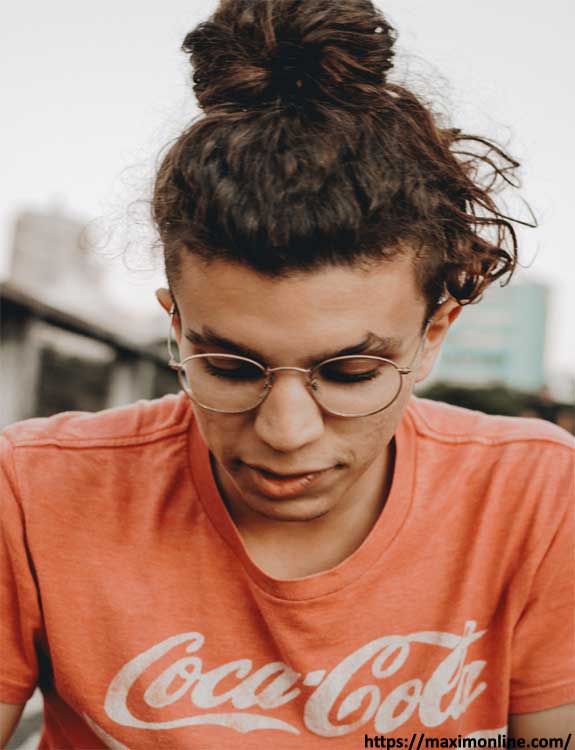 There can be elegance and beauty in the simplest of hairstyles. Torvi’s female Viking hair with loose curls are one of the best hairstyles for women warriors. Some front or side hair is pinned towards the back while other hair are rolled to create a messy style. 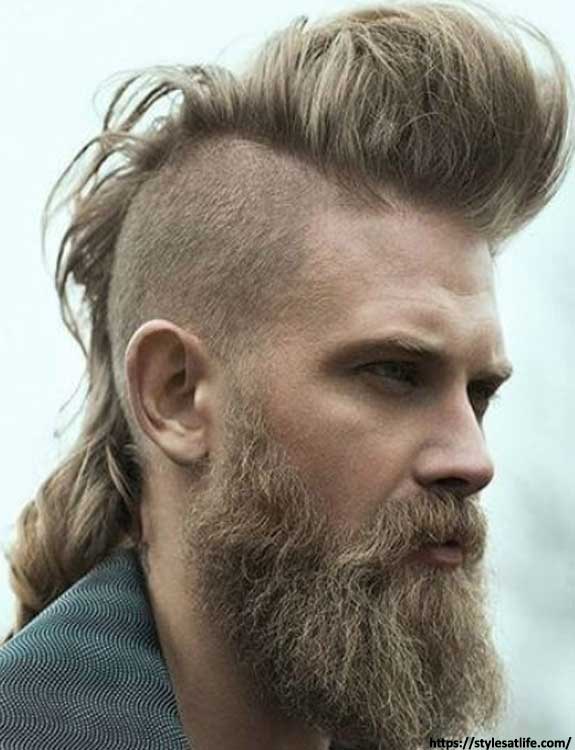 Temple shave undercut is one of the trendiest Viking hairstyles of the 21st century. When combined with a modern appearance, a temple shave can give you the same edgy appearance as an authentic haircut in Viking style. 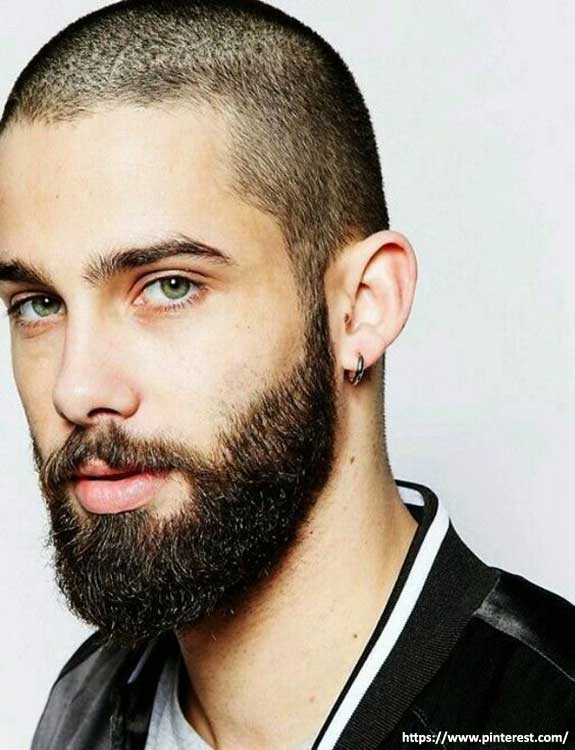 Viking hairstyles have a signature style of the undercut. But not all styles need undercut. Some of them have a fully shaved head. The messy long beard complements this shaved head. This combination gives a rugged masculine look and warrior-like feel. Today, many men prefer to keep a full beard with a shaved head, which gives a decent trend to the rest. It’s best to maintain a long beard with a completely shaved head to achieve an attractive asymmetrical look.

15. Viking Mohawk with Slick Back

This Mohawk hairstyle has long hair with an undercut. The top hair is slicked to the back. Due to the hair’s slickness, it is essential to backcomb the locks and spray them with hairspray before wearing a Mohawk. 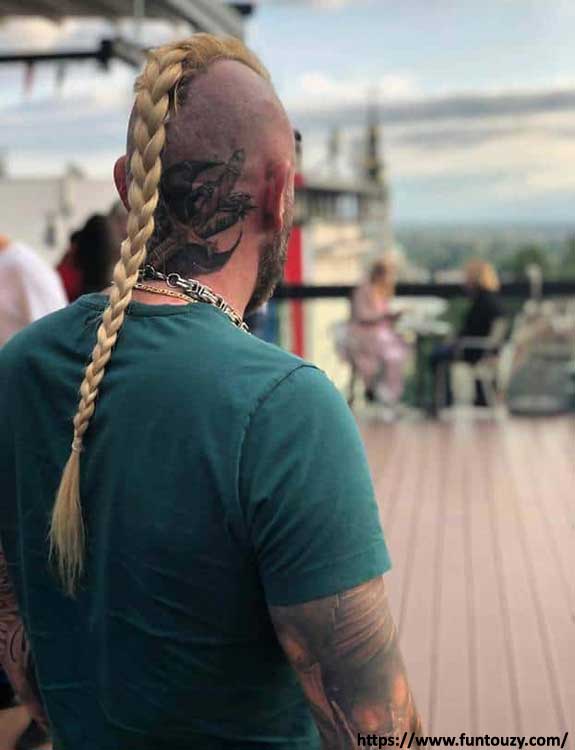 There is always a trend for tattoos. Viking people used these tattoos in their hairstyling. One of the most favourite hairstyles for Viking men and women was the tattoos with an undercut. Tattoos are made on the upper left and right sides of their ears. Moreover, they used to make different symbols in tattoos. 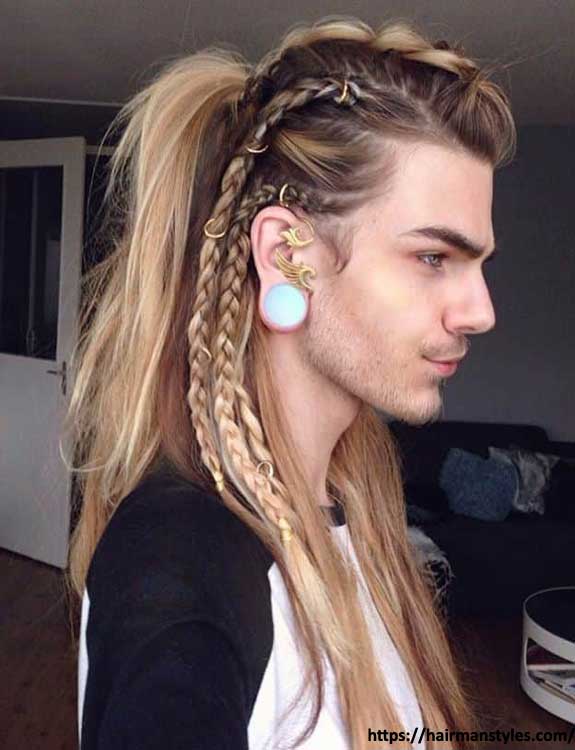 A Viking hairstyle with long hair can look seriously awesome. Loose braids are a great example of such a style. Those who have never had any braided hairstyle before need not be intimidated. It’s surprisingly easy to get started, and it matters not if it’s not perfect. However, it’s sometimes good to go with messy braids. 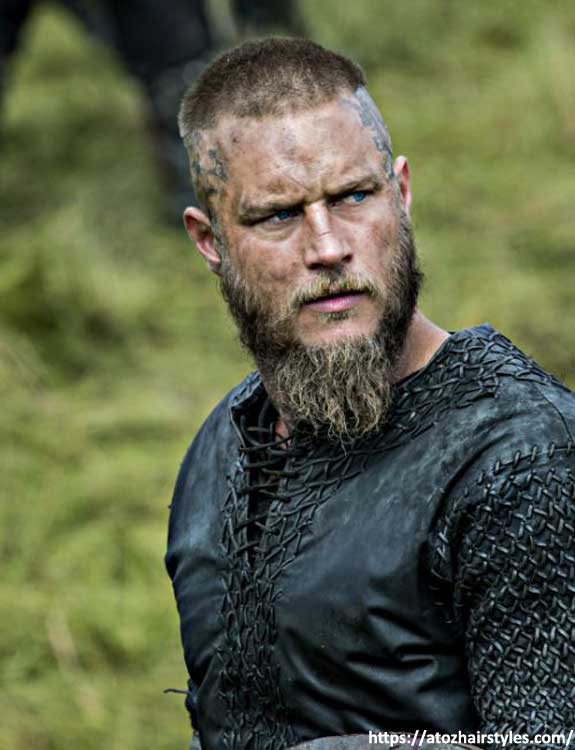 Having a Buzzcut is always a tough decision, but it can be easily managed with a beard. Blonde hair color has always been the favourite color for Vikings. This style of buzzcut with a blonde beard can be a fantastic way to enhance your look.

For a seriously subtle way to infuse your hair with a Viking touch, opt for a low fade haircut. The hairstyle, which transitions from a longer length on the top of the head to a short, shaved length near the ears, is the perfect way to experiment with Viking hairstyles without committing. To completely nail the look, just be sure to leave your hair long and thick on top and flip it over to one side. 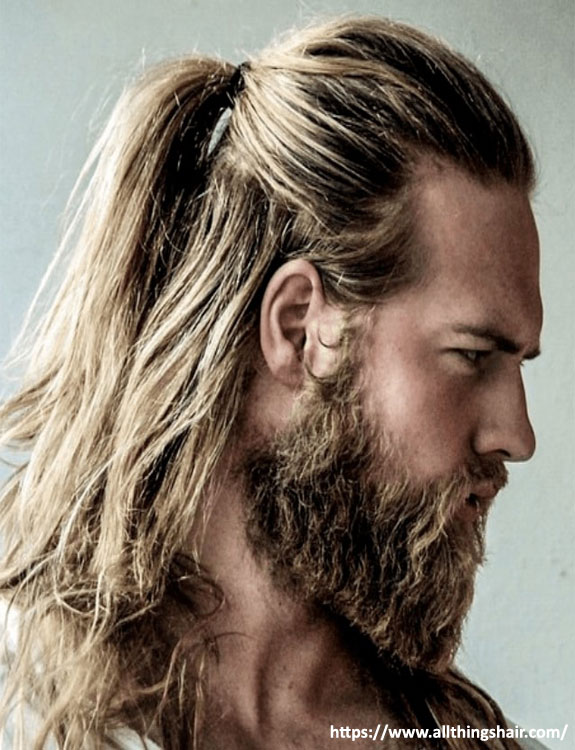 The Vikings were a well-groomed population, contrary to some myths that all Vikings had long, tangled hair. Traditionally, men shaved the back of their heads short and left their hair long in the front. It was also common for women to have long and well-groomed hair, which they styled in attractive hairstyles or tie back in a bun. The majority of Viking men had long hair with messy beards to give a solid and rugged look.

Did Vikings Have dreads?

According to some historians, the Vikings braided and arranged their hair into dreadlocks in a unique way. It was a common and considered an easy hairstyle in their men and women. Many of their warriors adopted this hairstyle to tie their long hair and to create a robust look.

What Did Viking Head Tattoos Symbolize?

Only a few of the signs have been found about Viking people that they use tattoos. But some of the studies have shown that Viking people used head tattoos to symbolize strength, power, and warrior look. Moreover, they also used tattoos to pay devotion to their gods.

Viking women and men had more alike faces than modern women. Women’s faces of those times were more masculine than today’s women, and they had prominent brow ridges. A Viking man, in contrast, possessed a more feminine appearance than the face of today’s man, with less defined jawbones and brow ridges.